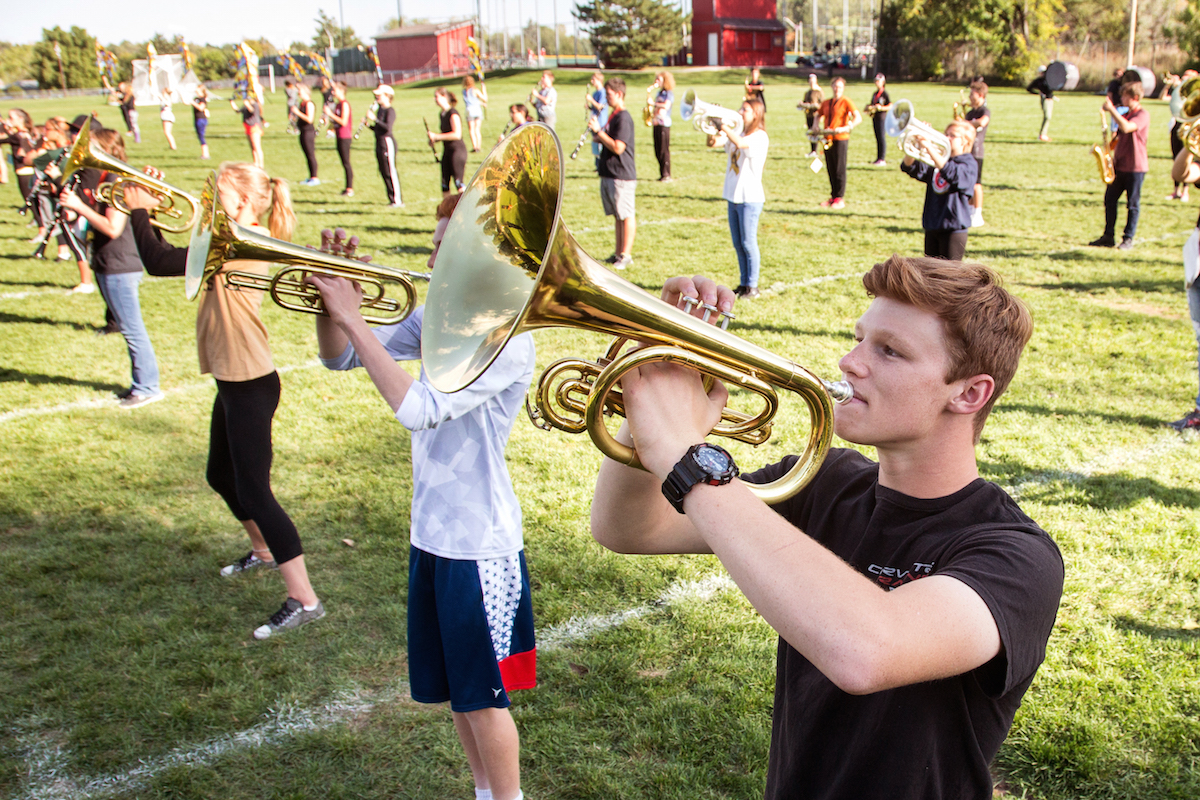 When members of the Heritage High School Scarlet Regiment marching band gather for practice after school, the grassy field fills with musicians, instruments and flags in preparation for another long, three-hour practice session under the hot Colorado sun. As they move to  their “dots” (positions) on the field, a swarm of warm-up notes fills the air. Band director Garren Cuthrell hustles toward the front of the group to start practice, and head drum major Erin Mortensen shouts a quick question over the noise. Trying to get the director’s attention, Erin says, “At the end of the third movement, do you want us to do a full measure descender or a two…” But the rest of the question gets lost in a blast of brass horns from behind them. With a big smile he shouts back, “Whatever they are doing now, just keep doing that!”

Indeed, whatever they are doing now is working. The band was crowned Open Class Champions at the Legend Marching Invitational in Parker, and scored their first 70 point performance on their way to a 13th place finish at the Colorado State Marching Band championships at the Air Force Academy in October. These results represent a significant comeback from three years ago, when the band had dwindled to 27 members and was losing in similar competitions to much smaller schools. 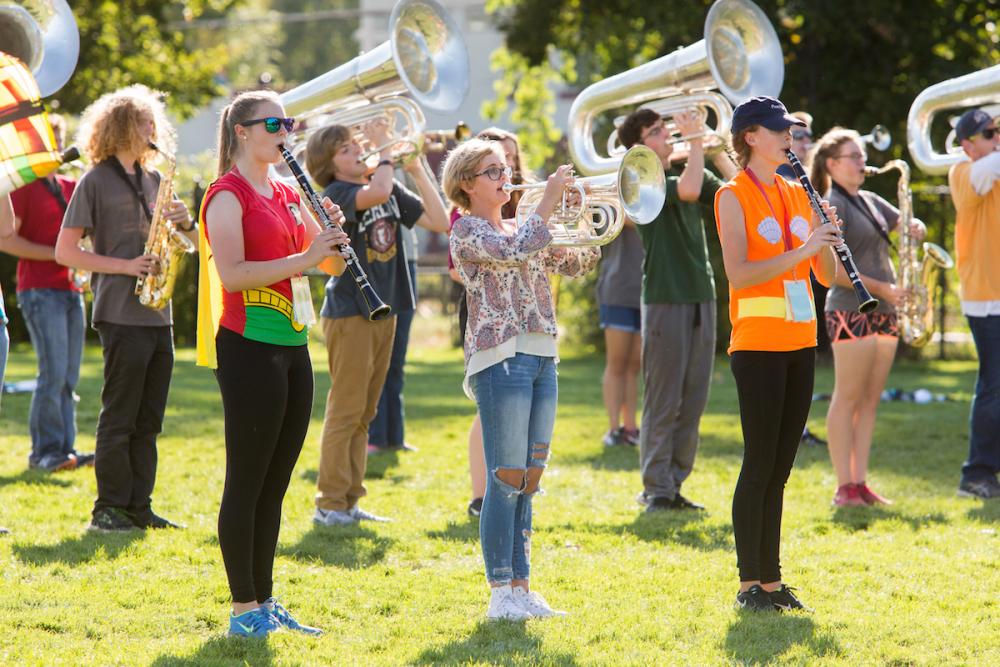 Evan Meyer, a senior trumpet player and section leader, was part of that tough year but persevered to see the turnaround. “In my freshman year we took last place in state - dead last. But this year, we look like a real marching band. This year is our best shot at doing really well.”

Today the band marches with 101 members - including 16 Color Guard performers - and to get to that level, the band members have invested an impressive amount of time over the past months. It begins in early summer when the color guard and percussion sections meet once or twice a week to work on technique and music. Then the entire band gathers for two weeks of band camp in August, where they learn and practice their marching style and parade/halftime music. Once school begins, practice is three days a week after school with competitions on weekends.

Learning new choreography while perfecting your roll your step (from heel-to-toe) and marching an eight-to-five (eight steps for every five yards) takes countless repetitions. Corey Gust, a junior mellophone player, believes all that practice makes a difference. “We are committed to be our best. We’ve put in lots and lots of time with band camp, summer practice and after school practice - and it’s all paying off when we see these results,” said Gust. “And now that we have a huge sound from so many instruments, even our warm-ups sound great.”

To grow the band to its current size, Cuthrell had to find more brass, woodwind and percussion musicians to join, so he started with a simple promise. “If you want to be in marching band, I’ll find a place for you,” said Cuthrell. “Nobody will sit on the bench.” 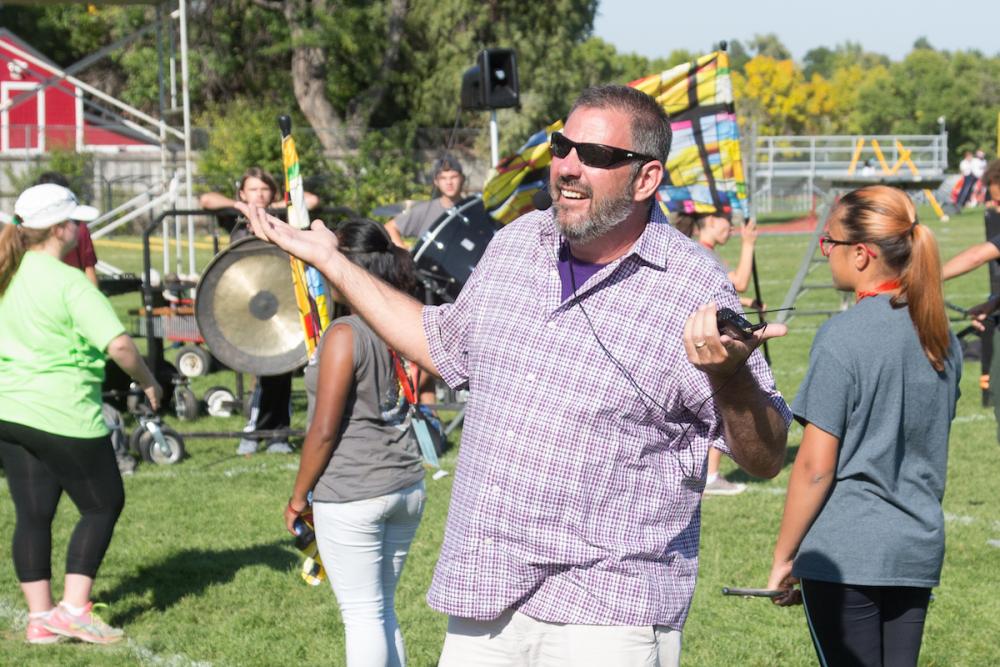 As more students joined the ranks, it was important they accept the marching band culture Cuthrell had created: a blend of commitment, teamwork and respect for their peers and the music, all coming together under his direction. “We’ve all grown into this program together. I’m a kinder, gentler director than I used to be. Our kids are under so much pressure from all directions these days, the last thing they need is some guy out there yelling at them,” said Cuthrell. “I have found that if you build strong relationships with them, it’s a lot easier to challenge them. And once they trust you, they’ll go out on a limb for you and come back for more.”

Senior Erin Mortensen loves her role with the Scarlet, while also continuing a family legacy - her sisters marched in the HHS band and her mother was a drum major in school - so music runs in her veins. “Growing up, I always wanted to be in band. As the head drum major now, I know my energy level affects the band, so I always try to be upbeat and never slouch or look tired,” said Mortensen. “I even stifle yawns so no one can see if I’m tired. My day at school can be just as tough as anyone’s on the field, but I want them to look at me and think…Erin isn’t tired, so maybe I can pick it up and keep going.”

With all the time spent on drills, sets and marching, strong relationships develop within the band that extend beyond the chalk lines on the field. Sophomore Kathleen "Kat" Sposato likes the camaraderie, noting, “I’ve made more friends here because we have something in common - the band - so we take care of each other like a family. We help each other because we are all in this together.”

While being part of a big team is rewarding, it can also make it difficult to stand out among the hundred plus uniformed musicians during a performance. Lexi Domenico, a junior color guard member, loves the choreography and physical demands of spinning and tossing flags and other props - in addition to the dancing - but laments that her role occasionally requires a bit of explaining. “Sometimes you go unnoticed on the field, because people will ask, ‘You’re in the band? What instrument do you play?’ So when I tell then I’m in the color guard with the flags and the dancing, they say, ‘that’s you? That’s so cool!’” And Domenico doesn’t hide her passion about that role, “Color guard is the first activity that I’ve done where I’ve seen myself improve - like, ‘wow, I can do this!’ And that makes me incredibly happy.” 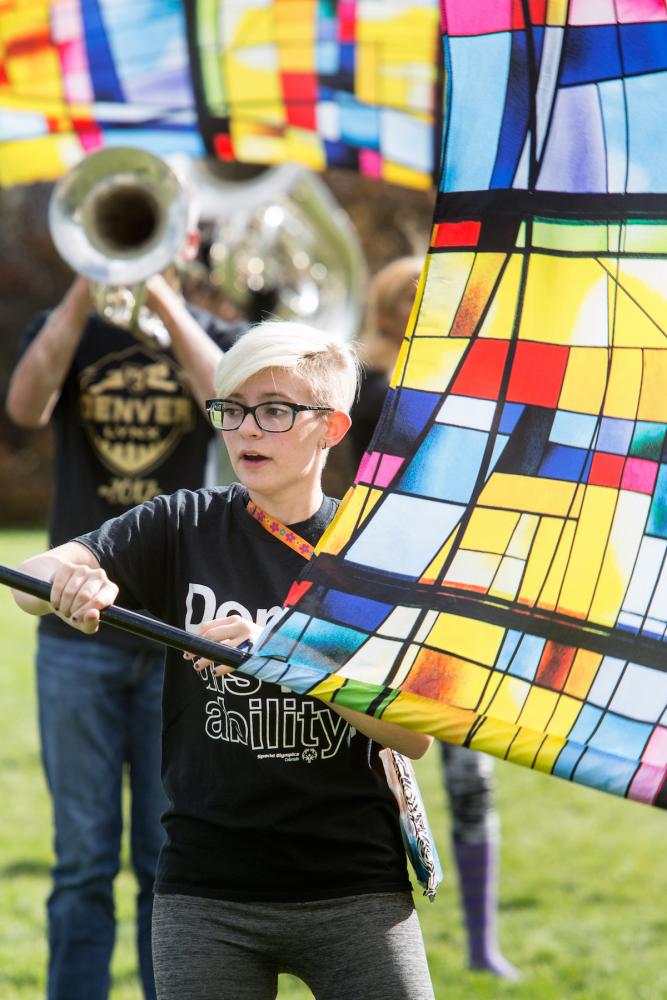 The band’s resurgence needed a lot of parts to work together smoothly, and there is one critical ingredient that Cuthrell offers as perhaps the most important. “We couldn’t do what we’ve accomplished without our great band parent organization. Our Band Parent President Debbie Fuchser is crazy good - she’s in the band room 4-5 times a week and handles all of the logistics along with the Board.” The band parents do the hard, behind-the-scenes work - including feeding the kids at events, managing the uniforms, getting the props and equipment to and from sites, renting trucks and filling a 35’ trailer to haul the gear. “They do everything for us - without their support, we can’t be the band we are today,” said Cuthrell.

When the band takes the field to perform, the countless hours needed to polish and perfect the routine are showcased in less than 10 minutes. And from the first note to the last, it’s go time...no timeouts for adjustments or do-overs, no substitutions, not even a chance to catch your breath. Being a member of this marching band means working together for the good of the band. As the Scarlet Regiment continues to improve, they’ve learned if they “keep doing what works”, success is just a few precise steps away.