The Littleton Public Schools Long-Range Planning Committee will operate under the following charge:

“To review the district physical plant, program capacity, enrollment boundaries, transportation routing, and major capital equipment requirements, and determine what improvements to efficiency, sustainability, and infrastructure needs may be required during the next five to ten years.”

The Long-Range Planning Committee is hosting two identical community events where attendees can drop in any time during a two-hour open house to learn about the options being considered regarding overcrowding at Ford, ask questions of Committee members, and give feedback:

If you are unable to attend an open house, all of the content available to view and review is presented below. 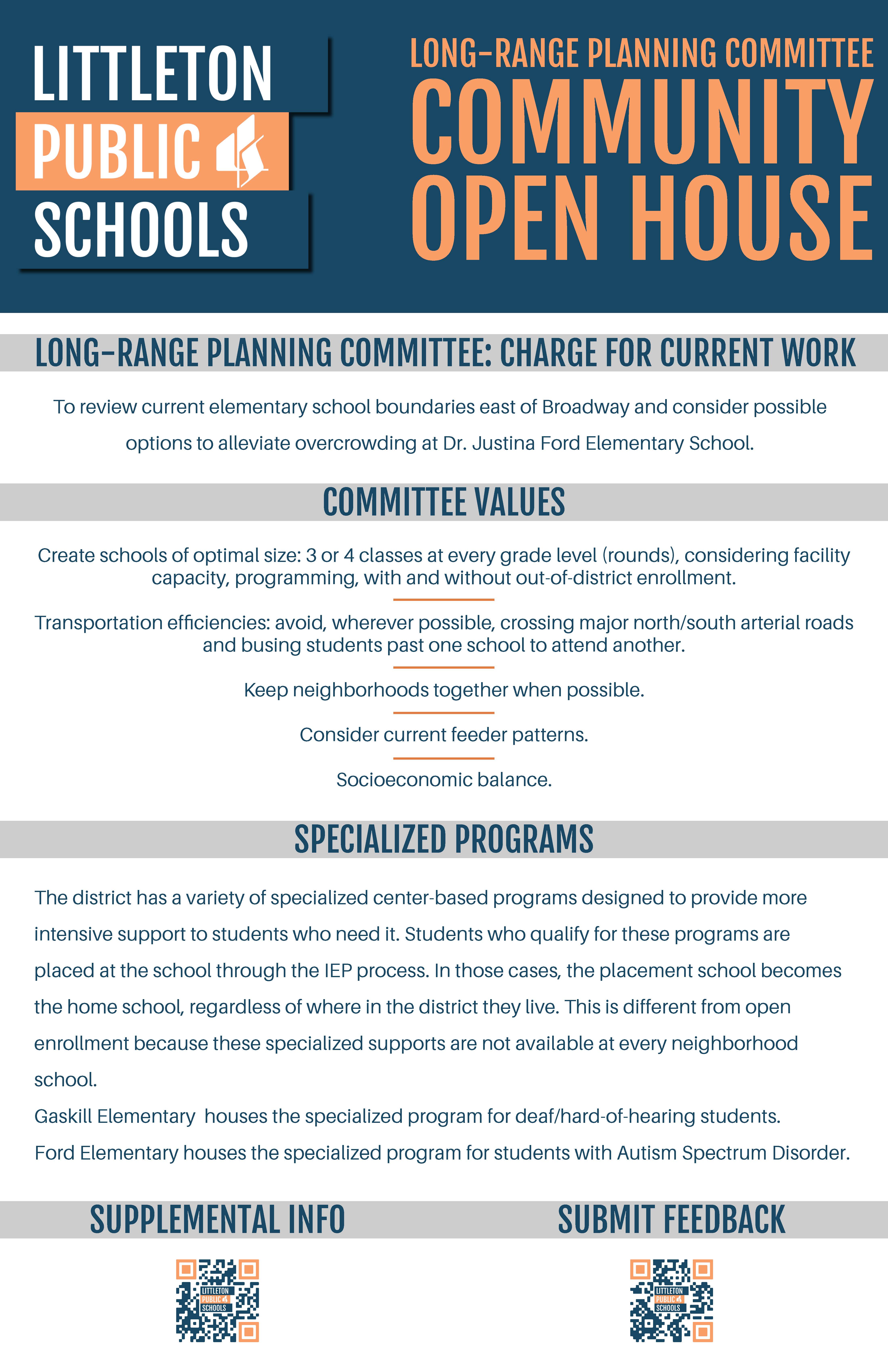 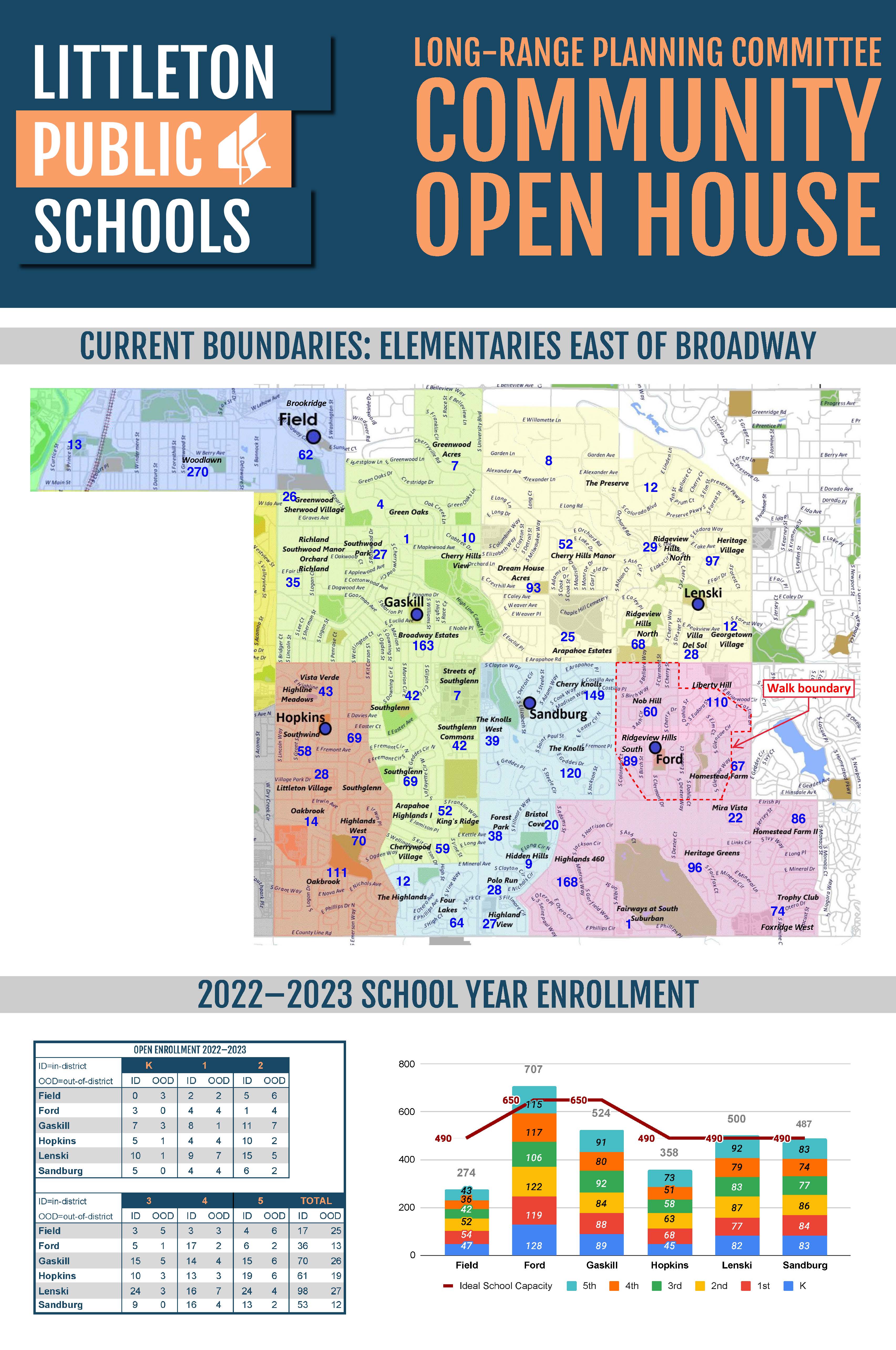 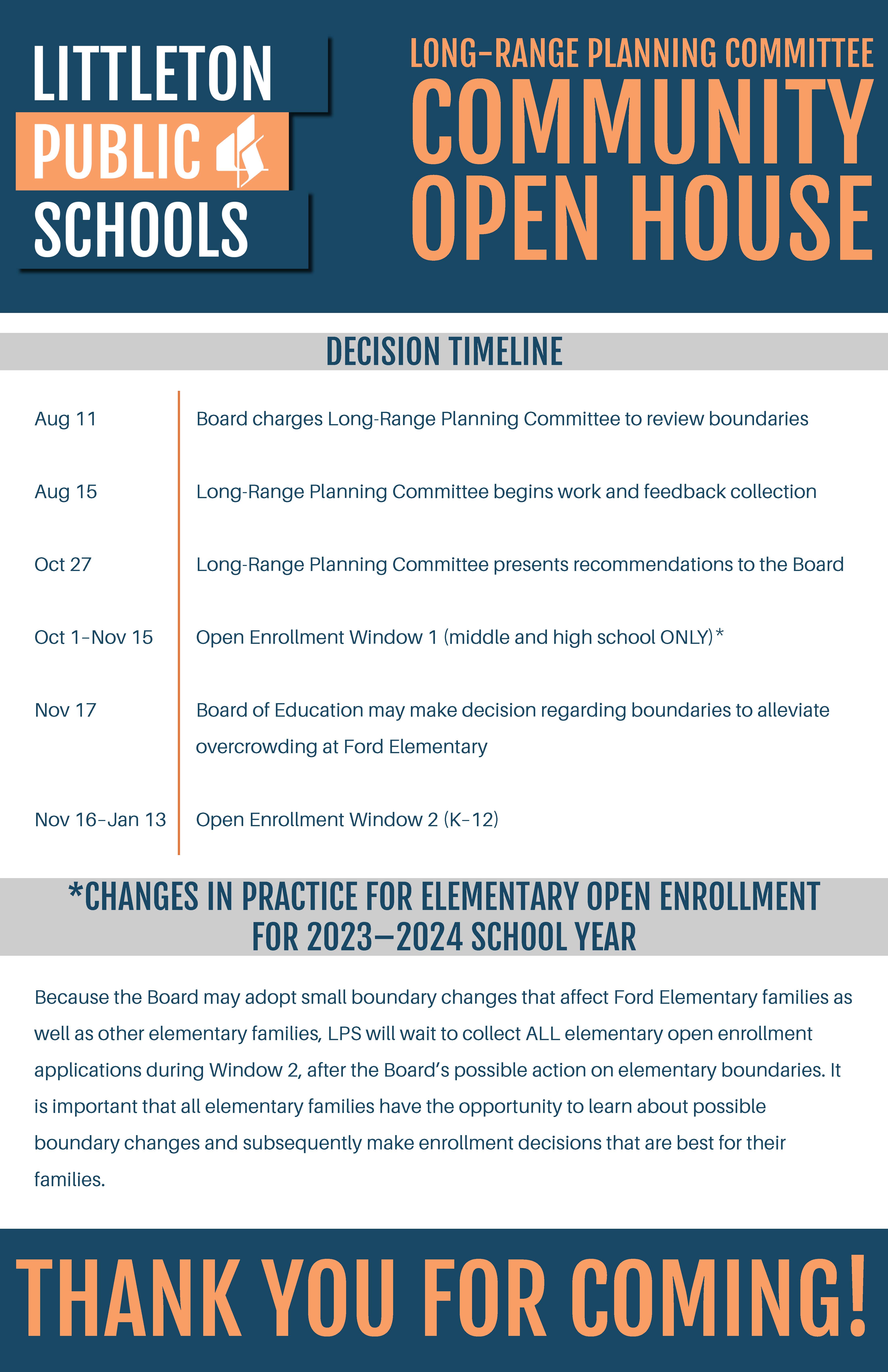 Open house attendees had the option of submitting a feedback notecard or scanning the "Submit Feedback" QR code, which took them to a Google Form (feedback form closed on Friday, October 7 at 6:00 p.m.).

The committee is hosting two identical community events where attendees can drop in any time during a two-hour open house to learn about the options being considered, ask questions of Committee members, and give feedback:

Members
The committee is comprised up to 16 voting members representing the following interest groups:

Background
In the spring of 2017, LPS began to explore how to streamline school start and end times to better meet the needs of teenagers and to pave the way for improved and more efficient transportation services in the future. Research tells us that a later school start time positively impacts alertness, mental health, wellness and behavior in high school and middle school students, which means students are better prepared to learn.

Community conversations about the possibility of changing school start times began last spring through 22 staff and 30 parent/community meetings throughout the school district. In addition, nearly 6,000 parents, staff and secondary students participated in a survey about potential changes to school start times. The LPS Board of Education asked the Long-Range Planning Committee to further study the issue and provide the Board with recommendations in November 2017.

The committee has been meeting since the fall of 2018 to study school boundaries to better balance enrollment, provide boundaries for the new elementary schools to be built for the Ames neighborhood and the combined Highland and Franklin neighborhoods, and to address the growing transportation challenges resulting from increased traffic in the south metro area -- all in an effort to improve boundaries to best serve students and provide them with the best educational experience possible.

Four stakeholder open houses were scheduled in January and February 2020, where attendees could drop in any time during a two-hour open house to learn about each scenario, ask questions of LRPC members, give feedback and take an exit survey, which provided another opportunity for feedback.

All four open houses provided attendees with the same opportunities to interact with members of the Long-Range Planning Committee, learn about the boundary options, ask questions, and provide feedback. All returned surveys were tabulated verbatim in a spreadsheet for LRPC members to review as they draft their final recommendations to the Board of Education, to be presented later this spring. Additionally, feedback received via emails, phone calls, and letters was also recorded for the committee's review.

What’s next?
The LRPC will provide an update to the Board of Education later this spring. The Board is tentatively scheduled to make decisions about the boundaries by the fall of 2020, and approved new boundaries would likely take effect in the fall of 2021.

Parents and staff members who participated in the survey indicated:

Summary of October 2017 Start Time Survey Results
In October 2017, LPS employees and parents were invited to participate in another survey regarding possible changes to school start times.  6,305 parents and employees responded.  It was a self-selected survey with a response rate of 36%. Participants were asked to indicate preferences of a possible change to school start times among three choices:  Option 1, Option 2, and No Change (see the chart below.) Participants were asked their first choice and their second choice.

October 2017 survey results were presented to the Long-Range Planning Committee in early November, 2017. View the presentation.

The Long-Range Planning Committee recommended in August 2018 that the Board of Education put a bond question on the November 2018 ballot. View the committee's report to the Board.

The Board of Education reconvened the LRPC at the Board meeting on August 11, 2022

Meetings will be held from 4:30–6:30 p.m. at the Education Services Center

For information or other questions about the committee, please contact us: 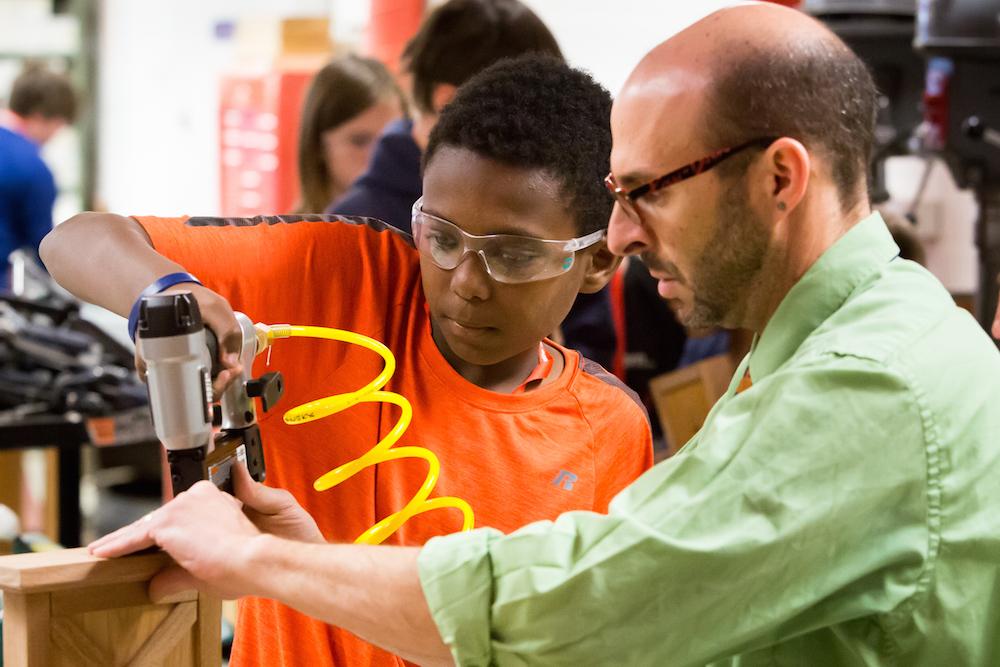 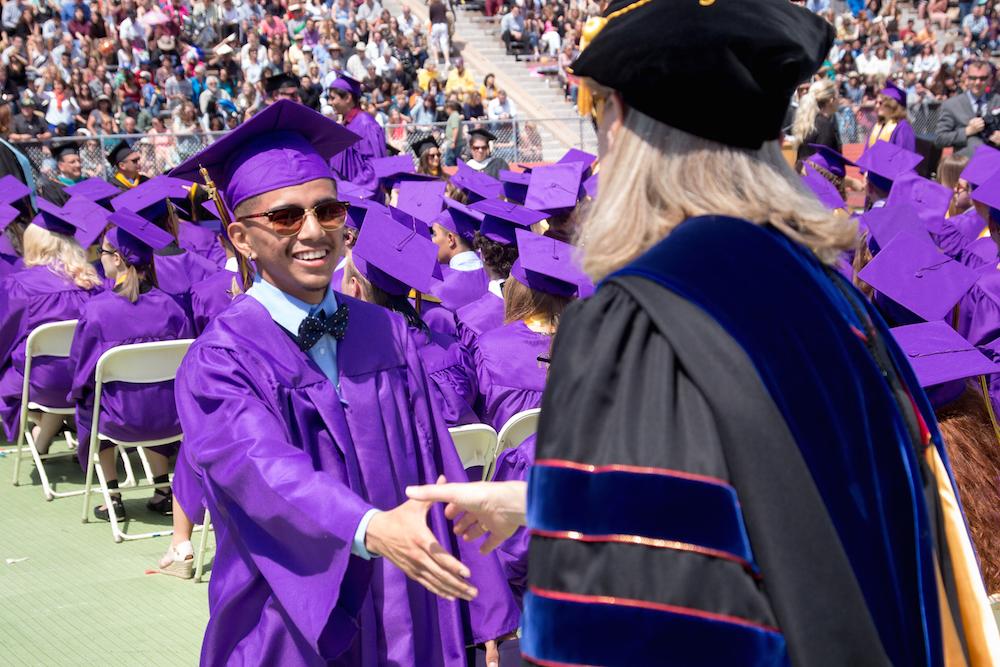 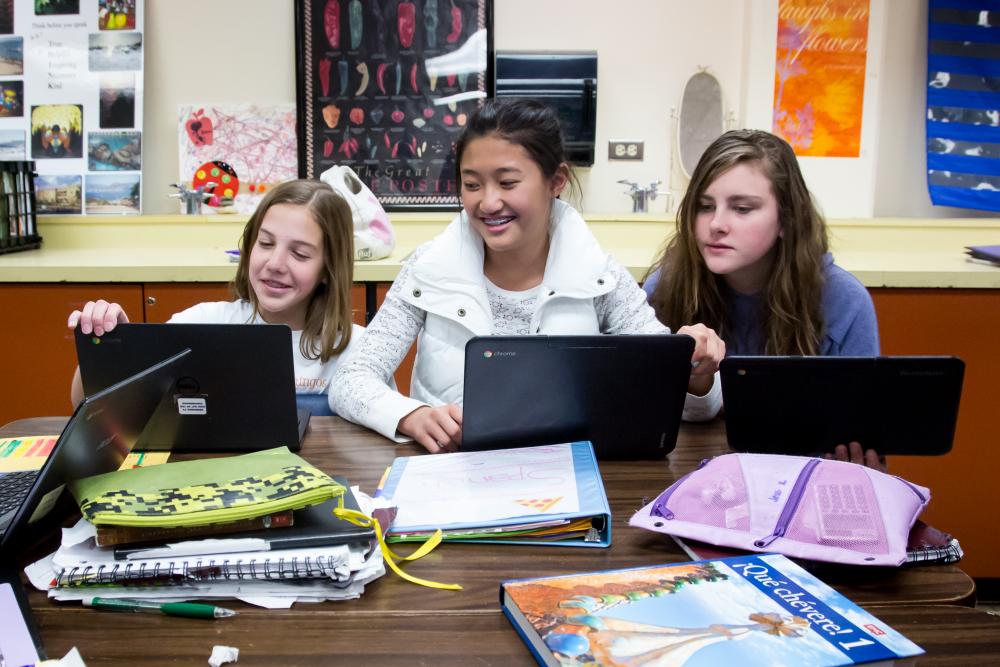 “Advances in understanding sleep and circadian regulation, and the negative consequences of missing two to three hours of sleep a day to meet the demands of education time, give us a new understanding of adolescent behavior. We now know it is their biological clocks, not laziness, that keeps them in bed in the morning and up late at night. Fortunately, the problems of short sleep duration and sleep deprivation caused by education time is one that can be solved by synchronizing adolescent education time to adolescent biology.”

“While long seen as a cultural and psychosocial preference, later bedtimes among adolescents are now understood to be a biological response to puberty, the onset of which results in a two-hour sleep-wake phase delay without lessening total sleep requirements. Therefore, adolescents have a biological need to be able to sleep later in the morning.”

"Why School Should Start Later in the Day"
Los Angeles Times