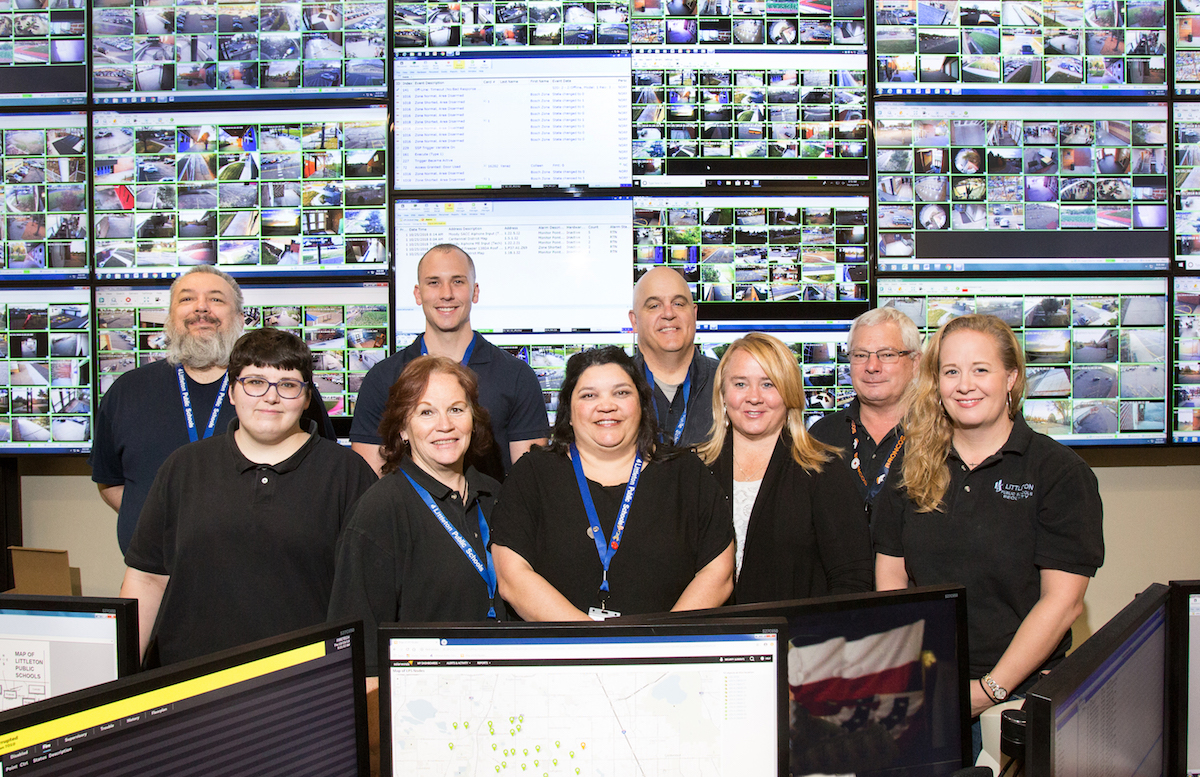 Industry-leading publication Security Magazine has ranked Littleton Public Schools #4 nationally for K-12 school safety in 2018. While LPS has made the list's top 20 every year since 2011, it came as little surprise that the district now sits at number four. In recent years, the district has invested more than $11 million dollars in security hardware for all 28 schools in the district's 28 square miles. Given all of the surveillance cameras, communications systems and state-of-the-art security hardware, the critical component that makes the entire system function effectively is the security team – a small group of dedicated LPS employees that care about the safety of 15,000 students and 2,000 employees – working around the clock to keep the district safe.

Led by LPS Security and Emergency Planning Director Guy Grace, the team takes an “all hazards” approach – they know how to prioritize the dangers, threats and events that can occur and what impact they could have on their ability to protect the LPS students and staff. When Grace started as a Littleton Public Schools security patrol officer in 1990, he was part of a six-person team that was tasked with catching thieves trying to steal air conditioners from school rooftops and computers from classrooms, investigating vandalism and monitoring electrical and heating systems as part of their role under the direction of the maintenance department.

“When I think back, it was dangerous responding to an alarm bell ringing in an empty school at night,” said Grace. “All we had were pagers and clunky portable radios – my radio actually shared a frequency with a local food delivery service. So we would arrive at a building and not know for sure what was happening inside. We basically went in to those buildings blind. But we did catch a lot of those bad guys, so we were pretty good at our job.”

Today, almost three decades later, Grace and LPS have come a long way from the days of scratchy walkie-talkies and pagers. He leads a 12-person district security department that manages the LPS security network and monitors and maintains the district’s unified security system. With the safety of LPS students as its number one priority, his team oversees a framework that includes access control systems, video management systems, audio surveillance, duress and mass notification systems. This district-wide networked security system (including fire and HVAC controls) is monitored twenty-four hours a day, seven days a week at the district’s Education Services Center (ESC) security office.

Just outside of Grace’s office, you can’t miss the huge wall of flat screen monitors showing live feeds from over 1,000 surveillance cameras peeking into every nook and cranny of the 28-square mile district. The patchwork of scenes is mesmerizing, filled with glimpses of students, teachers and visitors moving around and through school properties in real time, oblivious to the unblinking eye watching them. Grace says in a reassuring tone, “When students come into our buildings, they are in some of the safest places they could be all day. It’s important that they know we are here watching out for them, so they can feel secure.” 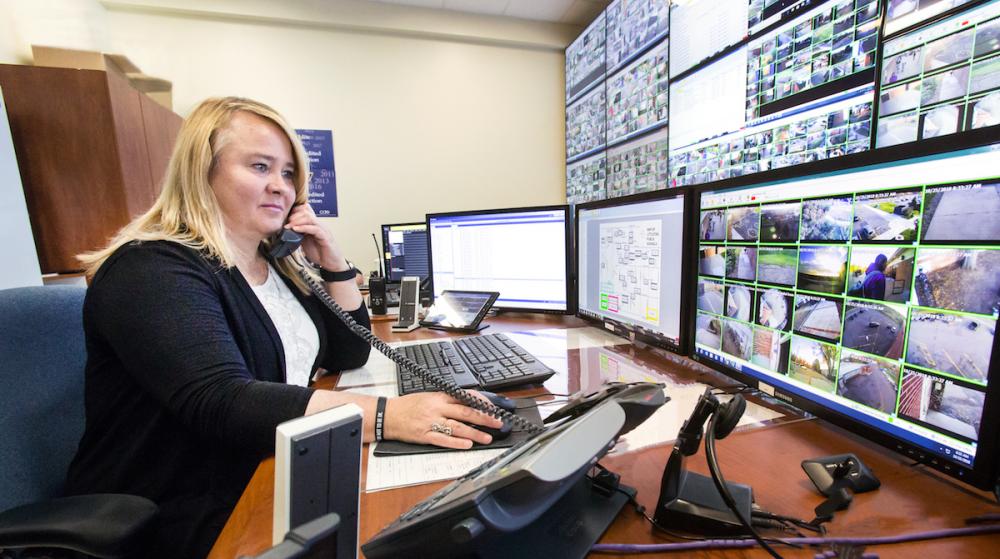 The vigilance starts when visitors approach any LPS school – they are seen on camera as they near any outside facility door. Visitors must contact the main office from an outside call box or be screened by campus security for entry into the building, while staff use district-issued ID cards to swipe and enter. Once inside, every guest or volunteer checks in at an LPS Connect kiosk to receive a visitor badge before proceeding to any other location in the building or on campus. Dara Van Kampen, Security Training Facilitator at LPS noted, “With entry access through remote-controlled door locks, ID cards and cameras, background screening of visitors and our team watching everything...we make sure it’s safe inside.”

All of this new technology provides a strategic advantage in keeping the schools secure. But, it’s the investment of “human” technology from the staff, students, parents and the community that drives the vigilant work necessary to keep the schools safe. Van Kampen recently spent time helping an elementary student who was having a rough day and disrupting class. Trained in crisis prevention, she responded to the call from the school and spent five hours working with the student, calming him by reading and talking with him, and eventually taking him home after school because he was too disruptive to ride the bus.

“When I showed up from ‘security,’ the student related to me differently than he did from other staff in the building,” said Van Kampen. “I believe it’s because I bring two things to a situation – I’m from the security department, and I’m also a mom. I have two boys in elementary school, so I can relate to these students easily. I use a softer side with my security role in those situations – and honestly, sometimes a kid just needs someone to hold their hand.”

The Assistant Director of Security and Emergency Planning, Mike Newton, grew up in Littleton while his mom worked at Twain Elementary School. He remembers, “I was always aware of the importance of what a school could do, especially for friends of mine that had rough home-lives. For them, school was a safe place to be during the day. In my role with the security team, I now have the opportunity to keep the school environment safe – to maintain that ‘home away from home’ feeling, where kids can feel safe at school and not worry about anything.”

The range of skills of the LPS security team is impressive. They are trained to safely defuse anxious, hostile or violent behavior. They are also trained in community emergency response (CERT), cardiopulmonary resuscitation (CPR), emergency medical services (EMS), firearms and first aid. They are Red Cross Universal Protocol trainers. They may be called upon to deal with disruptive students, medical emergencies, bus incidents/accidents and non-custodial parent issues. They partner with police and fire departments during emergencies – sometimes all in the same day. 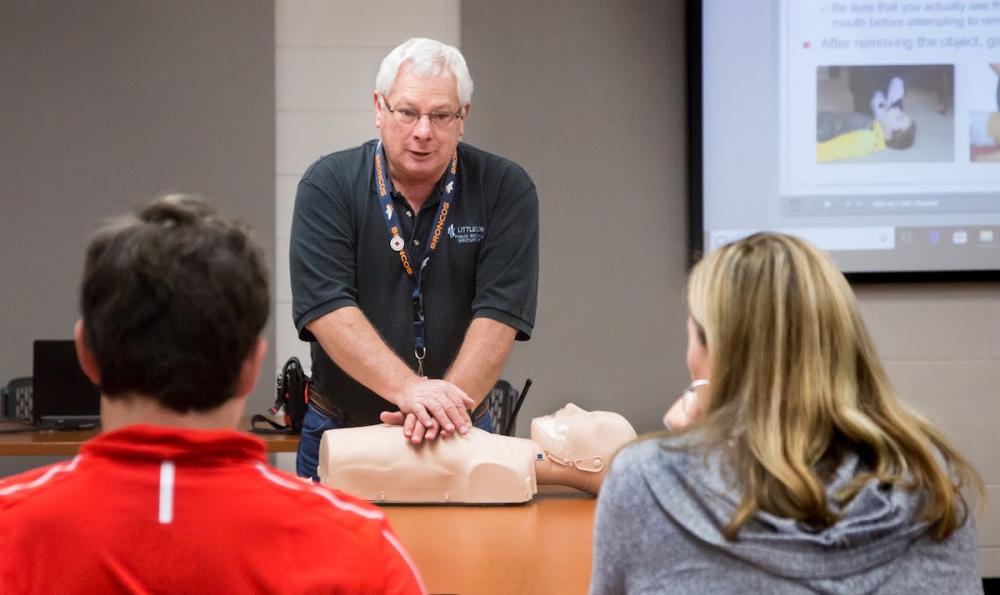 Bill Cornforth, a team member who started many years ago as campus security at Arapahoe High School, doesn’t take anything for granted. “Every day we walk through these doors, there’s another set of challenges for us. It’s all the hazards that come with a school district in a community that works and plays every day. We have to be very flexible in how we solve the problems we face.”

Sometimes those solutions include caring for community members outside of the school setting. Grace recently went on a call about a homeless person on school property and found him digging through a dumpster looking for food. After assessing the situation and the man’s condition, Grace radioed back to the office to see if there were extra shoes or an unclaimed sweatshirt that could be shared with the man, along with some food and water. Grace then  gave him a ride to a safer location. “As a team, we have a unique combination of experience, strength, intelligence and heart. We patrol our district with an eye on security, but we also look out for the community in general because it’s where we work and live,” said Grace.

Much of the daily security work unfolds as calls come in, and that includes serving in a key role every time LPS receives a tip through Safe-2-Tell Colorado. Safe-2-Tell is an anonymous tip line designed to provide a venue for students, parents, teachers, school administrators, security and law enforcement to share information and identify youth who are struggling, allowing for quick intervention to prevent tragedies from occurring. Working closely with mental health professionals in LPS Social, Emotional and Behavioral Services, the Security team investigates hundreds of Safe-2-Tell reports every year about threats, harmful behaviors or dangerous situations. They then coordinate appropriate responses between schools, parents, counselors, school psychologists and law enforcement. Every Safe-2-Tell tip is investigated, and as a result, students’ lives are saved.

Practice drills are scheduled at every school throughout the year, and most last less than five minutes. For example, a recent lockdown drill conducted at Heritage High School took about four minutes. Van Kampen followed up the drill with a roundtable discussion with staff and school resource officers to debrief what worked well and what might be improved. 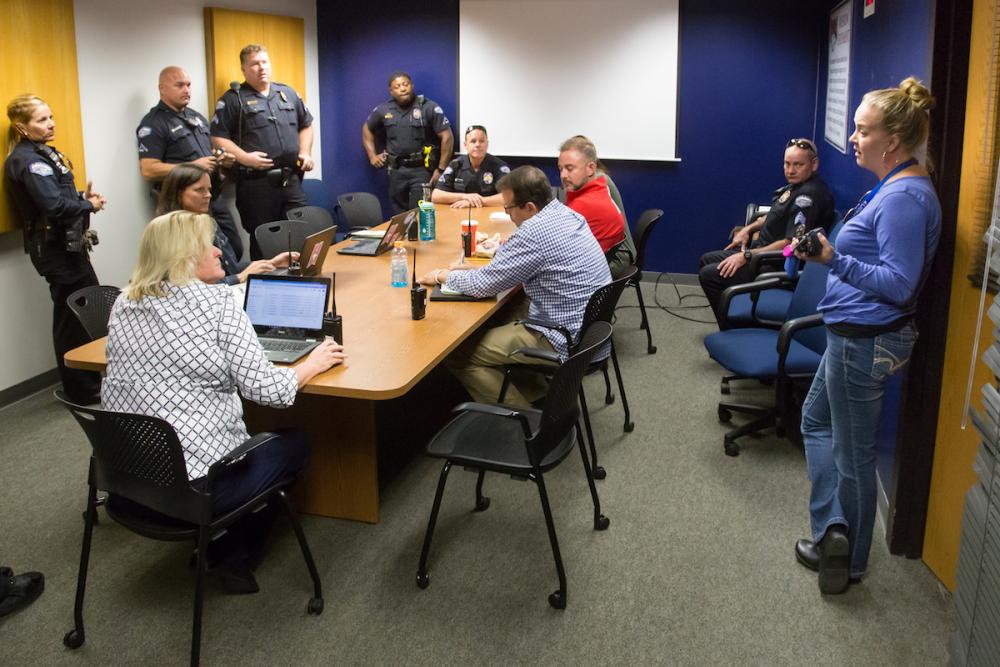 Many of the advancements made in the school safety and security industry were influenced by Grace and his innovative work in LPS over the past 30 years. As he and his growing team developed risk assessment tools, protocols and practices for school safety that benefited Littleton Public Schools, Grace shared them nationally through his work with industry leaders such as the Security Industry Association (SIA), National Systems Contractors Association and the Partner Alliance for Safer Schools (PASS). They in turn put them into use; Grace’s insight and experience are now present in countless schools across the country as a result. He is currently the PASS chairman and the 2018 recipient of the SIA Insightful Practitioner Award, which recognizes excellence in promoting the implementation of innovative security solutions. Grace is the first school safety official to be honored with this award. When he’s not on duty with the district, Grace is a regular speaker at school safety trade conferences and a frequent security commentator for various trade magazines and media outlets.

The Littleton community has always supported LPS' efforts to improve student safety throughout the district. In a 2018 community survey, 86% of respondents said it is important to use future dollars to maintain a safe environment where students can learn without worrying about being harmed. Grace is always working to move the district toward safer environments and being better prepared.

“All of us in LPS work hard every day to make sure our students and staff feel safe and are safe at school while working with our partners in law enforcement and in our community to keep potentially dangerous situations away from our kids,” said Grace. “You don’t often hear about us, but that just means that we are doing our job.” He sees his work on the national level as a way of helping others avoid what he’s seen during his 29 years at LPS. “Our team works 24/7 to make the district safer. We have all of the tools to go to the worst and deal with the worst, but it takes more than technology to reach the kids we want to help. It takes a human touch – compassion and understanding. A lot of the things you see us do are very low key, and that’s so the kids don’t worry. But when an emergency happens – we will be there for them.”